She was petite and reserved, the constant helpmate of her husband George Booth, but Ellen Scripps Booth (1863-1948) was a powerhouse in her own right. It was Ellen who insisted that a girl’s school be built so that her granddaughters could get a good education. In January 1928, Ellen gifted $200,000 to the Cranbrook Foundation for the building of Kingswood School for Girls. She would later contribute more to ensure the project reached completion.

Known for her modesty, strong religious values, and devotion to her family, Ellen was a steadfast force in the Cranbrook community, and beyond. 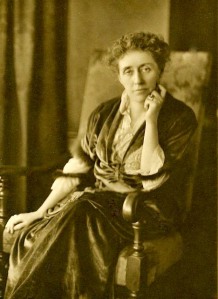 The Detroit connections of James E. Scripps and George G. Booth are well-documented: Scripps as founder of the Detroit News and founding member of what is today the Detroit Institute of Arts, and Booth as a founder of the Detroit Society of Arts and Crafts.  Less known, perhaps, is a venture near the end of Scripps’s life that helped create the Scripps Branch of the Detroit Public Library at Trumbull and Myrtle. The library was actually George Booth’s former home, renovated to accommodate library services. It stood in Scripps Park though a different library (the Frederick Douglass branch) sits there now.

Here’s the story. When George Gough Booth and Ellen Warren Scripps married in 1887, James Scripps built a house for them, designed by Mason & Rice, across the street from his own on Trumbull Ave. Fast forward to 1905. James Scripps donated 15 lots of property, on Grand River between Trumbull and Commonwealth, to the city of Detroit as a site for a park and branch library. He included $50,000 to be used for city beautification. 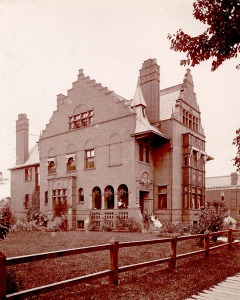 The Library Commission, on which Scripps served for five years, was already thinking of putting a branch in this area (no doubt influenced by Scripps), so the city gave the Commission the land. Now things get more confusing. Upon the death of James Scripps in 1906, the estate purchased the George Booth home (located next door to Scripps’s donated property; by this time the Booths had moved to Cranbrook) and included that in the gift. So the Library Commission didn’t have to build a new branch and used the $14,000 designated for that purpose to renovate Booth’s house as a library.

In fulfilling Scripps’s intent for a park, Booth hired H.J. Corfield, landscape gardener who designed the basic landscape for Booth’s Cranbrook estate.  Booth wrote to Corfield “I feel quite sure that we can carry through a nice piece of work and will be able to pay the foundation for a small park of unusual attractiveness in this city.”  Corfield transformed land that was “little better than a city dump …  into one of the prettiest parks in the city of Detroit.”

The former Booth home was almost doubled in size and opened on July 3, 1909 as Scripps Branch Library.

There’s another interesting twist to the story. In 1898, James Scripps added an 800-ton octagonal chapter house, modeled after the one in Westminster Abbey, to his own home on Trumbull across the street from the Booth’s. It contained his book and art collection. In 1927, James’s son, William E. Scripps, made a gift of the tower to the Library, along with its collections, it was moved across the street and attached to the Scripps Branch Library!

The sad ending is that the branch closed in 1959, and was demolished in 1966. The Gothic tower was razed sometime later, after a valiant attempt to save structure, by George Booth’s youngest son, Henry Scripps Booth, failed.

When most people hear the word “Cranbrook,” they think of Eliel Saarinen, modernist design, art and science, or private education.  Some even think of our sister schools in England, British Columbia or Australia.  But how many people think of farm animals named “Daisy Lovelace” or “Nellie of Cranbrook?”  When the Booths purchased the old Alexander farm in 1904, one could see rolling farmland covered with hay fields and orchards.  Indeed, George Booth soon became a gentleman farmer.

In fact, Cranbrook boasted TWO working farms, originally called Farm Group #1 and #2, situated on the grounds of what are now the campuses of Kingswood School and Cranbrook School respectively. Farm Group #1 (1904) was designed no, not by Saarinen, but by that other architect, Albert Kahn! – one of Kahn’s earliest commissions for George Booth. Farm Group #2 (1917) was designed by Canadian architect Marcus Burrowes and his partner Dalton Wells, recommended to Booth by Kahn who was getting mighty busy with his industrial projects. When the footprint for Cranbrook School for Boys was developed, George Booth asked Eliel Saarinen to follow the plan for Farm Group #2. Today’s Hoey Hall is on the site of the old silo. The only remaining evidence of the farm buildings is the orignal farmhouse designed by Burrowes and Wells.

The year was 1918, fourteen years after George and Ellen Booth purchased the property they called Cranbrook.  The lay of the land was far different from the lush greenery, grading hillsides, and bountiful gardens which exist today.  An estimated 150,000 trees were planted during George’s lifetime, a testament to his devotion to the Arts & Crafts ideal of surrounding one’s self with nature.  Buildings during this time were scarce; in this aerial view, the only two existing Cranbrook buildings seen are Cranbrook House (top middle) and the Meeting House (middle left), which would later become Brookside Lower School.  The house seen in the lower left, called Edgevale, was the home of George’s cousin, Clarence Booth. 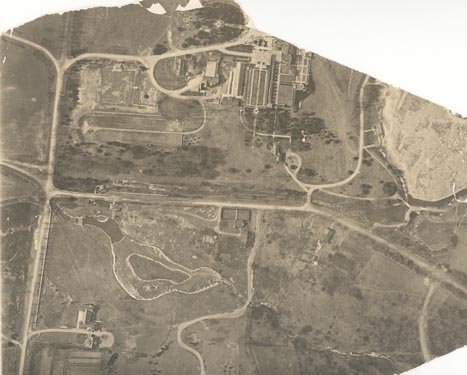 Photo Friday: The Man Behind the Camera

For nearly thirty years, a stocky man with his trademark black mustache and the nickname “chief mug-taker” was a ubiquitous figure around Cranbrook. He was Harvey Croze, and he served as the official Cranbrook Foundation photographer from 1943-1970. Croze started his career in the darkrooms of Chrysler and General Motors, later studying under Ansel Adams. As chief photographer, Croze was a fixture at all Cranbrook institutions, snapping shots at everything from Cranbrook School for Boys sports games to the Academy of Art studios to the Institute of Science exhibitions and beyond. An award-winning photographer whose photographs have appeared worldwide, Croze will forever be remembered at Cranbrook as the man who captured history in the lens of his Leica.

Apparently, my brain was already celebrating the fourth of July, because I posted Photo Friday on Wednesday (for no other reason than I thought Wednesday was Friday.  By the way, who else thinks today is Saturday?).  So, this week we’re going to  have TWO Photo Fridays.  Remember a few weeks back, when we held a caption contest for this fabulous photo of Clifford “Bud” West?

Our question was simple: what is Bud West thinking?  We had some great answers, but we’ve got to give the win to West’s son, Justin, who said, “What do the cats represent?  Heck, sometimes cats are just cats!”  We swear – only a hint of nepotism was involved in the decision.  Thanks to all who entered, and congrats, Justin!  And a special thanks to my colleagues, who never bothered to mention on Wednesday that I was confused about which day it was.

In the early days at Cranbrook Academy of Art, students were encouraged to submit entries to a myriad of design and architecture competitions.  Sponsored by museums, magazines, colleges and industry, competitions were a way for fledgling designers to make a name for themselves.  Winning entries could catapult a designer or architect into the national arena.  In 1939, the “Design of Radio Cabinets” was sponsored by the Radio and Television Department of the General Electric Company through Interior Design and Decoration.  Designs were submitted in two categories: a table model and a console model.  The only design requirement was that a “dial or tuning control treatment” be incorporated in the design.

This entry was submitted by the team of Edward Elliott and Ted Luderowski, both architecture students studying under Eliel Saarinen.

If AMC’s long-running television show Mad Men has taught us anything, it is that it is hard being a woman in a man’s world.  And while Peggy Olsen’s struggle to be taken seriously as an advertising professional in the 1960s is fictional, many talented, driven, and creative women found themselves fighting a similar battle in their own professions in the 1960s and 1970s.

Suzanne Vanderbilt was one such woman, and her work as a designer at General Motors is highlighted in A Driving Force: Cranbrook and the Car, now open in the lower galleries of the Cranbrook Art Museum.  A Cranbrook Academy of Art graduate, Vanderbilt was an active member of the “Damsels of Design,” the young women hired by Harley Earl to work on the interiors of vehicles for General Motors in the 1950s and 1960s.

Though the assembling of these women into a charming and attractive group of “damsels” was a PR ploy, the fact remains that these women designers did real work for GM, re-thinking car interiors at the exact moment that the auto industry began recognizing women as significant consumers of their products.  Women have historically made the majority of household purchasing decisions, and as cars increasingly became associated with domestic American life it became clear that women would have a greater role in buying them.  Recognizing this trend, GM acknowledged that its design, engineering, and marketing of cars would have to shift.  And who better to understand the female consumer than women themselves?