“Neither Snow Nor Rain”: Cranbrook and the New Deal Post Office Murals

In 1940, the Columbus, Kansas post office received an imposing addition: a giant slab of terra-cotta.  Mounted on the wall, the bas-relief showed mail delivery in a rural community, the sort of neighborhood where the postman drops off the mail in a field of horses.  Crafted by Waylande Gregory as part of a New Deal art project funded first through the Public Works of Art Project (PWAP) and then the U.S. Treasury Section of Fine Arts, the post office mural (titled R.F.D.) represents not only an example of Gregory’s large scale sculptural installations but also a period of time when the American government invested heavily in the idea that public art installed in everyday environments could bolster the American economy and elevate the national discourse.

END_OF_DOCUMENT_TOKEN_TO_BE_REPLACED

Apologies if your stomach can’t take this photo – we just couldn’t resist! Cranbrook Institute of Science Director Dr. Robert Hatt is clearly cooking up a storm, with eel playing a central role in the evening’s meal.  The photograph was taken in Milles House, which the Academy of Art leased to CIS in the 1950s as housing for their director.

Dispatch from the Archives: “The Councilman Doesn’t Like it”

Okay, I couldn’t resist! Today, while researching a query on sculptor Bernard “Tony” Rosenthal, I ran across this photo in our collection. When I showed it to one of our volunteers, Rita Faudman, she said (while laughing), “what can you do with THIS?” And my immediate reply was, “post it on the blog!” 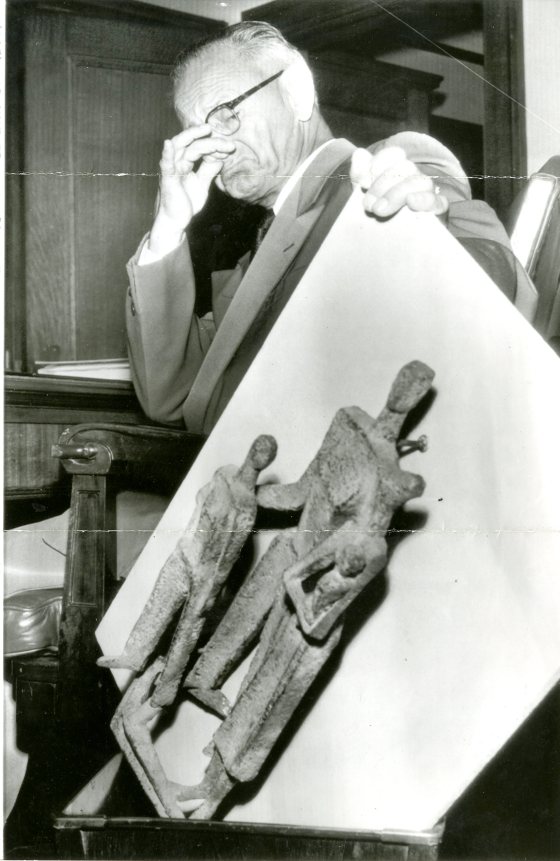 END_OF_DOCUMENT_TOKEN_TO_BE_REPLACED

Cranbrook and the Car: A Different Look

Currently on display, the exhibition A Driving Force: Cranbrook and the Car thoughtfully illustrates two key ways in which Cranbrook has been affiliated with the automotive industry throughout its history.  James Scripps Booth was an avid artist and inventor, even taking apart, rebuilding and designing cars in the garage of Cranbrook House from an early age.  Later on, the Academy of Art encouraged students to enter competitions which included designs for Packard Motor Car hood ornaments (1934) and exterior design, hood ornaments and trunk lid medallions (1950).  Graduates were employed by the Big Three automakers in a variety of ways—working in the design studios building models for new cars, as part of Harley Earl’s “Damsels in Design,” and as textile designers for automotive interiors.

Warren and Grace Booth with chauffeur in the Chalmers 40 in front of Cranbrook House. Circa 1910, Cranbrook Archives.

END_OF_DOCUMENT_TOKEN_TO_BE_REPLACED 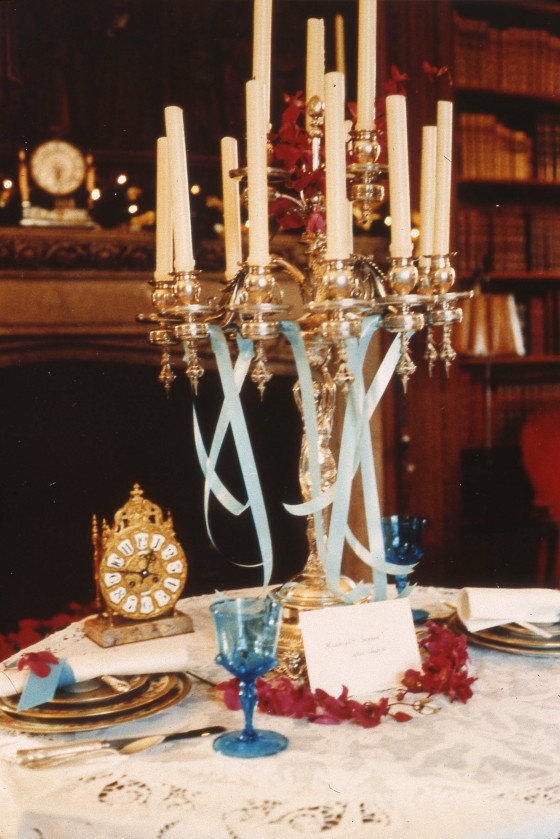 Since 1975, the Cranbrook House and Gardens Auxiliary has hosted their glamorous yearly fundraiser “Holiday Tables” in November.  An invitation to local retailers and decorators to show off their holiday decorating chops, Holiday Tables also gives participants a new view into Cranbrook House.  Filled for a brief time with contemporary and thematic design, visitors get to see what Cranbrook House looks like as a bustling house and pretend for a few short days that they live there.  Here, an exhibitor from the 1988 Holiday Tables shows off a candelabra center piece on a table in the library.

Anyone who did a search on Google today probably saw the sketched-out train engine that forms the word “Google” on the homepage.  Honoring the 120th birthday of pioneering American designer Raymond Loewy, the Google doodle pays homage to Loewy’s trademark streamlined look.  While we can’t claim Raymond Loewy as a Cranbrook designer, we took his birthday as an opportunity to identify what sort of material and ephemera we have connected to this design powerhouse. END_OF_DOCUMENT_TOKEN_TO_BE_REPLACED

Dispatch for the Archives: the Joys of Processing

Although we live in an age of technology, databases, and the digital representation of collections, one of the most interesting and rewarding jobs for an archivist (at least this one!) is still the processing of a collection.  What does this encompass? It is the way in which an archivist takes the paper records of an individual, group, or institution and sifts through them, weeding out duplicates, sorting, organizing, and  rehousing in acid-free folders and boxes, all to make it accessible for you, the user!.  To some this may seem a tedious task (and it certainly can be depending on the nature of the collection) but the rewards are usually worth it.  Finding that one gem that tells a new story, or that group of documents that sheds new light on an old story—this is the stuff archivists dream of!

I am currently processing the Swanson Associates Records that document the partnership between architect J. Robert F. Swanson and interior designer and textile artist Pipsan Saarinen Swanson.  Right now I am looking at the project files that relate to the firm’s architectural commissions from 1926 to 1977.  So, as a sneak preview (the collection is not yet open for research), here a couple of interesting discoveries:

END_OF_DOCUMENT_TOKEN_TO_BE_REPLACED

The theme of the first Crandemonium Ball was the Court of Crandemonium. It prompted this newspaper article declaring that the party was in the “twenty ninth century mode.” 1934, Cranbrook Archives.

Since we already upset tradition by posting a “Photo Thursday,” we thought we’d skip today’s Photo Friday and instead focus on a subject near and dear to our hearts—Crandemonium!  A costume ball thrown at various intervals during the Saarinens’ tenure at the Cranbrook Academy of Art, Crandemonium was a no-holds-barred party.  From the painted backdrops to the fantastical mythology, Crandemonium had it all.  Academy of Art students were essential to the party, competing to design the interiors and often appearing in the most outlandish costumes of all. This year the Museum Committee has resurrected the beloved Crandemonium party for their yearly fundraiser, happening this Saturday at the Cranbrook Art Museum.  Just in time, enjoy the Crandemonium ephemera from the past! 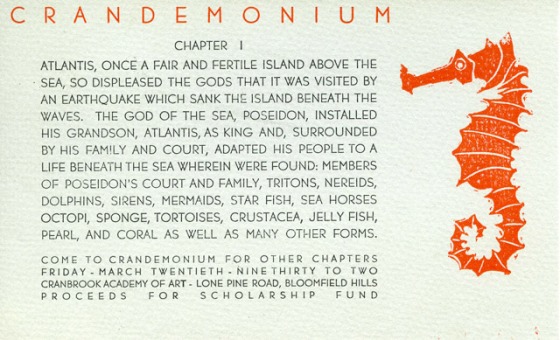 An intriguing invitation to 1936’s Atlantis-themed Crandemonium, this card featured the first part of the story of Atlantis. The invitee would presumably learn the remaining chapters upon attending the party. 1936, Cranbrook Archives.