My family has been going “up north” for nearly 50 years and in 1967, purchased property in Good Hart, Michigan. A popular vacation spot nestled in the woods along the bluff of Lake Michigan, the area from Harbor Springs to Cross Village has been a retreat for numerous Cranbrook-related luminaries over the years. In the 1940s, Henry Scripps Booth and his family vacationed in Good Hart at the Blisswood and the Old Trail Inn resorts. In the 1950s, Cranbrook Academy of Art painting instructor Wally Mitchell began vacationing up north, and in 1972 built an A-frame cottage on the beach just south of Cross Village. Bob and Pipsan Swanson began designing buildings near Harbor Springs as early as 1941 as well. Blog posts about these and other Cranbrook stories in northern Michigan can be found on the Cranbrook Sightings blog.

This object in focus today is an unpublished manuscript in our collection penned by a lesser known Cranbrook Academy of Art student named Marjorie Young. When I first read “Cabin,” my heart skipped a beat as I soon realized that Young was writing about MY up north: the place where I go for, as I jokingly say, my “mental health holidays.” The place of trees and wind and waves lapping in the distance, of spectacular sunsets and so many beautiful rocks that there is not time to look at much less collect them all. Young wrote about the same sort of experiences and thought-feelings in “Cabin” from the time she first visited the area in 1935 with her family, to 1946 when she bought her parcel of land with her friend Barbara, and through the 1980s. (Marjorie passed away in 1988.)

Marjorie Young received her M.F.A. in painting from Cranbrook Academy of Art in 1951. She and Barbara originally intended to build a small studio in which to work and house their “cultural artifacts.” The initial cabin sat close to the bluff but due to land erosion but was moved back and expanded to a larger cottage in 1973. Over the course of Young’s career, she taught art at the Toledo Museum of Art, The Detroit Institute of Art, Western Michigan University, and The Oakland Art Museum in California among others. She was also Director of the Battle Creek Art Center from 1963-1974. However, no matter where she lived or worked, she always returned to her cabin up north.

In the preface of “Cabin,” Young wrote “sitting in the studio which overlooks Lake Michigan . . . I am distracted. Everywhere is growth and beauty, all senses are pleased and excited whatever the hour or season. As I stand inside at the window, waiting for that most hushed and spectacular wonder of each day – the setting of the sun – I know once more the serenity of being here, absolved from all conflicts.” Marjorie’s up north, my up north, and the up north of many of us will always be this same place of respite, of refuge, and of creativity, hopefully for decades to come. 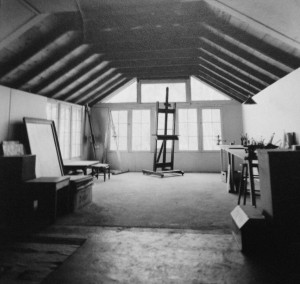 3 thoughts on “Object in Focus: “Cabin” by Marjorie Young”