Happy Belated Birthday to Our Founder!

September 24th marked the 150th birthday of Cranbrook’s founder, George Gough Booth. Born in Toronto, Mr. Booth had an early interest in art and architecture. In 1881 his family moved to Detroit and he put his artistic talents to work by purchasing half of an interest in an ornamental ironworks firm. The business was successful and used many of Booth’s product designs. 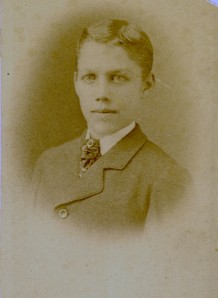 In 1887 Booth married Ellen Warren Scripps, daughter of Detroit News founder James Scripps. The following year he sold his share in the ironworks business and joined the News staff as its business manager. The News blossomed under Booth’s direction, becoming one of the leading metropolitan dailies in the nation. In 1906, Booth became president of the newspaper, succeeding his father-in-law.

In 1904 George and Ellen Booth purchased a run-down 174 acre farm in Bloomfield Hills and named it Cranbrook after Booth’s ancestral town in England. Booth called upon his long-time friend, and noted Detroit architect, Albert Kahn, to prepare working drawings for the building of Cranbrook House. Kahn responded with an English Arts and Crafts inspired design the Booths moved into their new home in 1908.

In 1922, believing their country estate could serve a larger public purpose, the Booths shifted their focus toward building the six institutions at Cranbrook: Brookside School, Christ Church Cranbrook, Cranbrook School (for boys), Cranbrook Academy of Art, Cranbrook Institute of Science, and Kingswood School (for girls). George Booth was a visionary, and with his wife Ellen, set new standards for generosity, leaving us a legacy we are proud to be a part of. Happy belated birthday George!

“We were unwilling to go through life with our aims centered mainly in the pursuit of wealth and with a devotion wholly to the ordinary opportunities for social satisfaction.  We were not willing to leave all of the more enduring joys for our children or the joy of work in so good a cause entirely to our friends after we had passed on; rather did we wish, in our day, to do what we could and give tangible expression now to our other accomplishments by adventures into a still more enduring phase of life.  We wished to see our dreams come true while we were, to the best of our ability, helping to carry on the work of creation.”  (George Gough Booth, Address at Founders Day, October 28, 1927)

One thought on “Happy Belated Birthday to Our Founder!”