In March 1936, Henry Scripps Booth traveled to California to meet up with his parents who had been wintering out west. Henry spent three weeks at The Desert Inn in Palm Springs where he went for walks, painted, and wrote many letters home to his wife, Carolyn. The following letter from him describes the famous people he saw while there.

“Desert Inn pepped up yesterday. There were three hundred fifty extra for lunch out-of-doors . . . Monte Montaigne (I believe that’s his name) entertained the people with trick roping acts and riding his trick horse, but I knew nothing about that until it was all over. I did see the horse in his private trailer parked in the grounds, however.

“But the guest of guests is none other than little Miss Shirley Temple who has come here with her mother and a mother’s friend to spend a couple of weeks.”

Temple and her family were frequent visitors to The Desert Inn, often around the Easter holiday. In 1936, the Temples stayed there after Shirley had completed filming “Captain January” and “Poor Little Rich Girl.”

“The new King of bally old England could hardly cause the other guests to take more notice. A waitress called my attention to her last night at dinner, sitting at right angles to me only two tables away. Everybody was craning his neck to have a look at her, and those who left the room first all sat by the door so they could see her make her exit. When she came out and walked over by the office, most everyone suddenly had business over there too. Monte Montaigne and his wife and baby were there, and as the Temples talked to them, the crowd became fictitiously interested in the baby also. It is the same story where ever Shirley is.

“This morning she was out trying to bat tennis balls one of her bodyguards was batting to her. A few other children were in on the play. The gallery consisted of at least six people nearby and a lot of others (like Myself) in the distance. Later when she was throwing a ball to a dog, people were talking movies and generally going ga-ga over her. When I came back from the pool where I had been painting this afternoon, I did see her without spectators, but of course with the guard who in reality is her playmate, and another guard in uniform. The two of them had a lot of dried peas and were shooting them with a sling-shot just like the Littlest Rebel. 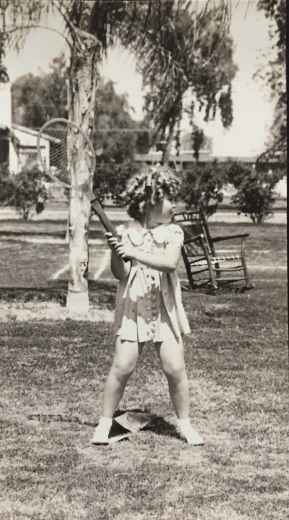 “She is not pretty, but certainly is cute. Her hair is curls all over of sort of a deep taffey [sic] color. She is very blond with pink cheeks. She screws up her face when she talks, has a twinkle in her dark eyes, and sort of minces around in her usual movie manner. She is very well behaved, sitting at the table and eating her dinner as good little girls should, and generally taking the attention she gets with good grace. Both nights she has taken a doll to dinner; last night a girl doll, tonight an Indian chief with a feathered headdress. She has a pink coat more or less like Cynthia’s [Henry’s daughter], but short as the French would have it so her bare legs are seen pretty much all the way up. She played around today in sort of drab slacks with a jacket to match. Their cottage is by the pool so I will see a good deal of her.”

2 thoughts on “The Littlest Rebel”