Frank Lloyd Wright, architect of the Smith House, called it his “little gem.” Many of his apprentices considered it one of the best examples of Wright’s Usonian style. So it should come as no surprise that he liked to stop by and see the Smiths when he was in Detroit.

On a visit in 1953, a luncheon was organized by Mary Palmer, Elizabeth Affleck, and Sara Smith. The Smith House was to be the site of the event. Sara Smith recalled the event in her biography, Building a Dream: The Sara Smith Story by Kathryn Watterson.

“‘Mary called me and Elizabeth Affleck and we decided to have a luncheon at my house,’ Sara says. ‘I had just been to the store and I had bought a whole lot of corn on the cob and much more fish than I could possibly use in a week.'”

The luncheon also consisted of lamb and some salads, but it was Sara’s corn that was a hit. “‘[Wright] said that one of his favorite foods was corn on the cob, and he helped himself and came over here to the built-in lounge.'”

The funny thing was, of all the people at the house for the luncheon, no one was sitting with Wright. “‘Frank Lloyd Wright was sitting toward the end of the lounge alone and no one came near him. No one was talking to him. Then he said, ‘Isn’t anyone going to sit with me?””

“‘So some people moved in. But they didn’t stay. They would go over and say a word or two and walk away. People just don’t seem to want to go up to a genius or a great person. I don’t know whether it’s fear of something else.'” 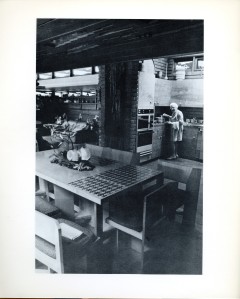 Sara and Wright discussed a number of things, including shadows and how Wright used them to best position a house to take advantage of the sun’s energy. “‘It was very interesting,’ she says, ‘and I was so grateful that I had gone over to sit with him. While we were talking, I asked him, ‘Mr. Wright, what do you consider to be your greatest design you ever made?’ His replay was ‘Why, the next one.'”

Note: Public tours of Smith House are offered from May through November. For information about private and group tours, please contact the Center at 248.645.3307 or visit us online.