January has been busy with research for my upcoming History of American Architecture: Cranbrook in Context lecture series. In preparing for the first lecture, which examines Cranbrook House and the larger Arts and Crafts movement, I found myself deep in the Archives looking through the architectural sketches of George Booth.

Around 1932, George Booth considered converting Cranbrook House into a home for both the Art Museum and the Institute of Science. With this proposal, the Booths would need a new “Cranbrook House.”

Mr. Booth sketched two plans for building south of the existing manor home, in the meadow along Lone Pine Road.

Caption written by George Gough Booth in pencil at a later date: “Scheme for a moderate sized residence for G.G.B. & E.S.B. on lawn directly south of Cranbrook House facing Lone Pine Road, by G.G.B. 1932 & considered in connection with plan to turn Large Residence over to Foundation for Educational Purposes. Museum—Library—School of Music, etc. etc.” Cranbrook Archives.

The simple, rectangular house is strikingly similar to the original plan of Cranbrook House from 1908 (before its 1918 and 1922 expansions), rotated 180 degrees. A front vestibule opens into a cross gallery, centered on a fireplace. Beyond is a long, 18 by 32 foot living room. A library and large dining room flank either side, with the only other public room being a reception hall.

The problem of symmetrical houses is that not everything generally fits in a pleasingly symmetrical way. George’s solution to this problem, like many architects before and since, is to add a service wing for the kitchen, maids’ rooms, and storage. 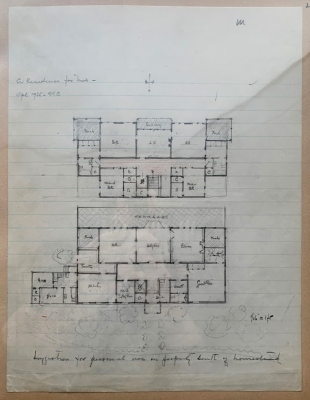 In what I presume to be a later sketch, the plan is further refined. Here, the vestibule sits more comfortably under the stairway, leading guests directly into the long gallery and living room beyond–one would see directly from the front door out of the living room window. The proportions of this proposed house are smaller, and the service wing substantially smaller (and even appears added on by Booth as a later sketch). The entire house is more symmetrical and regular, and there are fewer service spaces.

Had the Booths moved out of Cranbrook House, what did George envision happening with the space? Well, Booth sketched ideas of how Cranbrook House would be converted into an educational facility. 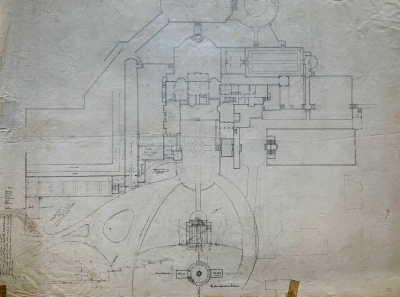 Proposed modifications and additions to Cranbrook House, for its conversion to use by the Institute of Science and Art Museum, by George Gough Booth, c. 1932. Cranbrook Archives.

The first floor of the house remained largely intact (though another plan shows subdividing the reception hall for offices). The kitchens were to be removed and converted to galleries, and the living room and sunset porch converted to a conference room and lounge. West of the 1918 Library wing offices was to be a large room for the Cranbrook Foundation and then a very large building of smaller rooms, including a library and assembly room. It is unclear what the smaller rooms are, but in one plan, they are drawn identically to Booth’s sketches for the Institute of Science’s research wing. 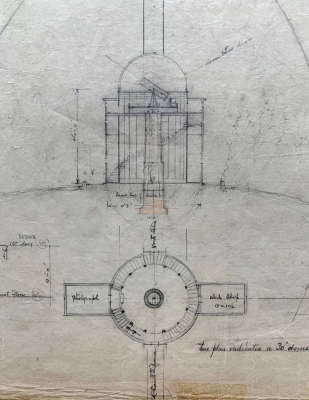 Proposed “Forum” (Observatory) on the “Mountain” south of Cranbrook House, sketch by George Gough Booth. Detail from the above plan. Cranbrook Archives.

The idea that Booth intended portions of the house to be dedicated to the Institute is further supported by what might be my favorite of George Booth’s unrealized plans for Cranbrook House: the transformation of the reproduction Fountain of the Tritons atop the “Mountain” south of the auto court into an observatory! 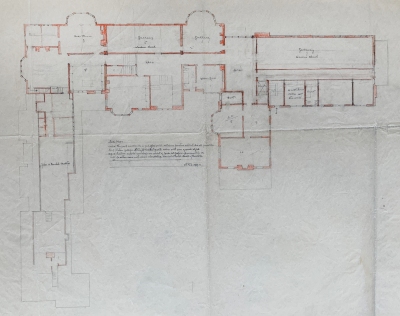 Proposed modifications to the second floor of Cranbrook House for its use as gallery space, by George Gough Booth, c. 1925-1935. Cranbrook Archives.

On the second floor, the series of family bedrooms and bathrooms, as well as the warren of service spaces, would have been cleared out, windows boarded up, and a series of interconnected galleries created. The bedrooms (not bathrooms) of George and Ellen were to remain intact as offices–previews to their use now as Cranbrook’s President’s suite of offices.

While the Booths did eventually leave Cranbrook House and its contents to the Cranbrook Foundation, they remained living in the house until their deaths in 1948 and 1949. The area where George proposed building their new residence is today the location of the Cranbrook House Parking Lot.

You never know what you’ll find in Cranbrook Archives!