The Art and Science of Numbers

“La science du nombre devient la clef de toute culture scientifique,” prefaces an article by then-director, Robert T. Hatt, in the May 1966 Cranbrook Institute of Science newsletter. Roughly translated – the science of numbers becomes the key to any scientific culture – an idea promoted through a long-term exhibition at the Institute, titled Mathematics Emporium.

Sponsored by International Business Machines Corporation (IBM), the exhibition was a replacement for the World of Numbers, which was a mathematics-focused exhibition on display at the Institute from 1961-1966. The goal of the Mathematics Emporium was to discover the character of mathematics or as Dr. Hatt explained, “what mathematics is all about.” 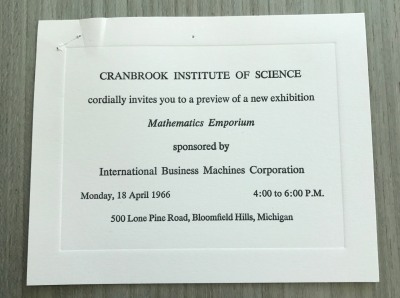 The exhibition was created by well-known designer, Gordon Ashby, who previously worked with Charles and Ray Eames.  During Ashby’s tenure with the Eames Office, he worked on the Mathematica exhibition (also sponsored by IBM) for the California Museum of Science and Industry in Los Angeles (now the California Science Center) and later for the IBM Pavilion at the New York World’s Fair (1964/1965). For the Cranbrook exhibition, Ashby worked in consultation with several mathematics teachers in the San Francisco Bay Area to design displays about geometry, calculus, the properties of space, the giving of form to algebraic equations, and the measurement of motion and change.

Ashby’s goal with the Mathematics Emporium was to depict mathematical subjects in an imaginative way to stimulate the curiosity of visitors and encourage further investigation. The exhibition was enclosed in an 18-foot modular showcase that contained a graphic panel with sketches or diagrams, as well as a collection of thirteen small displays. Ashby said he hoped to create an exhibition “that would make mathematics ‘look-at-able’ and bear repeated visits.” 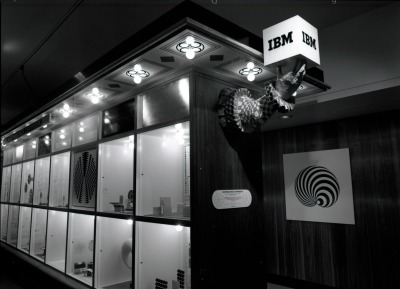 The exhibition showcase was trimmed in gold-leaf and included photographs, mathematical limericks, and quotes by famous mathematicians. Within each display there were thought-provoking questions, such as “what has a can of baking powder to do with calculus?” and “which mathematical science sees a coffee cup and a doughnut as alike?” The Mathematics Emporium was very popular with visitors, and it remained a permanent exhibition in the Institute’s collections for more than 14 years.