Object in Focus: “The Spirit of Nursing” Monument

Although there are many connections to Veteran’s Day within the Cranbrook community, the story I would like to share today is about a woman who left behind a Hollywood movie and stage career to serve her country. Frances Rich (1910-2007)  enlisted in the United States Naval Reserve during World War II and left a lasting legacy for all who visit Arlington National Cemetery.

The daughter of silent film star Irene Rich and the adopted daughter of naval officer Charles Rich, Frances was born in Spokane, WA in 1910. She received her bachelor’s degree in English Literature from Smith College in 1931. Between the years of 1932-1933, Rich appeared in six Hollywood films and one Broadway play. During this time she also became very interested in sculpture and started taking drawing, fresco painting, and clay carving classes in Paris, Rome, and Boston.

While in Paris, Rich met the sculptress Malvina Hoffman (1885-1966) and studied with her for two years. Upon returning to the United States, she continued to hone her craft at the School of the Museum of Fine Arts in Boston. Between 1937-1940 she studied sculpture with Carl Milles at Cranbrook Academy of Art, whom she worked with for 18 years.

In 1942, Rich enlisted in the U.S. Naval Reserve as a Lieutenant Jr. Grade. She served as the Special Assistant to Mildred McAfee (1900-1994), director of WAVES (Women Accepted for Voluntary Emergency Service). Prior to her enlistment, and while a student at Cranbrook, Rich sculpted the Army-Navy Nurse Memorial (1938). One of her best-known works, the 10-foot high statue was made from Tennessee marble and commemorated nurses who died during military service. The statue resides at Arlington National Cemetery and is often referred to as the “Spirit of Nursing” monument. 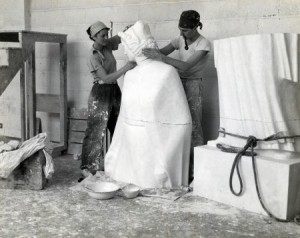 Today, along with all of the men and women who have bravely served our country, we salute Frances Rich.